http://www.bhutannewsservice.com
The powerful earthquake measuring 6.8 on the Richter scale that was centered in Sikkim, India has killed at least one and left four injured in Bhutan.
Latest reports coming in say that a 43-year-old woman was killed in Chhukha while she was fetching water from a river side. Falling boulders hit her and buried her.

The four injured were reported in Haa, a northern part of Bhutan. They have been undergoing treatment at the National Referral Hospital in Thimphu. The three women who have been seriously injured were all students of the institute of language and culture studies in Semtokha.
In Paro, the Ta dzong (administrative unit) suffered some structural damage, while some buildings in Phuentsholing town have also cracked from the tremor.
A massive landslide in Phuentsholing buried a Spark car while it was heading towards hospital. The driver managed to escape.
In Dagana, the quake has damaged Phunsum community primary school in Lajab village.
In Samtshe, nearly a dozen houses in three villages were reported damaged. Similarly, in Bara village, some houses were collapsed.
Also in Chhukha, four schools, three Basic Health Units, and three RNR centers have been damaged.
Similarly, Dagana saw damage of two RNR centers, three schools, five village centers and a Basic Health Unit.
The quake’s epicenter was 64km from Gangtok, Sikkim, India that left many people dead, hundreds injured and numerous infrastructures collapsed in eastern part of India, Bhutan and Nepal. The exact data could not be found as the cellular network was severely disrupted.
Meanwhile, the Prime Minister Jigmi Y Thinley on Facebook has urged the people of Bhutan to remain calm as the god would protect them from any further disaster.
Posted by अर्जुन प्रधान at 9:22 PM No comments:

http://www.twincities.com
EDITOR'S NOTE
9-year-old Neeta Chuwan holds on tight while riding a ride at the Minnesota State Fair in Falcon Heights, Minn., on Tuesday, August 30, 2011. (Pioneer Press: Ben Garvin) (Ben Garvin)
The Chuwan family is part of a wave of recent Bhutanese immigrants to the United States, part of an effort by the U.S. government to resettle 60,000 of the estimated 100,000 refugees living in Nepal and India. The Bhutanese government had expelled the ethnic Nepalis from southern Bhutan during a fit of nationalization in 1990. The Pioneer Press connected with the International Institute of Minnesota, a social service agency on Como Avenue across from the Minnesota State Fairgrounds, to take the family to the State Fair for the first time.
Man Chuwan pauses as he passes the GMC car display at Nelson Street and Judson Avenue on the Minnesota State Fairgrounds.
"New models," says Chuwan, 36, who worked as a Toyota mechanic while spending nearly two decades in a refugee camp in Nepal.
Meandering up Judson, the father of two points to the facade of the Village Idiot shop, where dried-grass awnings and skull-topped staffs greet customers.
"Nice decorations."
Read more »
Posted by अर्जुन प्रधान at 7:28 PM No comments:

http://www.bhutannewsservice.com
The Bhutanese Community Organization of Minnesota (BCOM) observed the Haritalika Teej today in Lauradaul City wall amidst a special function .
According to the organizer, the program was attended by more than 150 people. Participants danced to the rhythm of teej songs played on a CD player.

Two Bhutanese women, who posed to camera, smiles while other community folks rocked the floor in MN in background. Photo courtesy/Sila Dahal's facebook page.
One of the board members highlighted on the importance of the cultural and tradition aspect of teej celebration with a view to inform and keep the children and youths in contact with the culture. The community also recognized five high school graduates out of 10 graduates who completed their high school degree this year with khada.
Chairman of the BCOM also congratulated the graduates for their accomplishment and wished them the very best on their future endeavors.
Meanwhile, other founder members and well wishers were remembered and thanked even though they could not make it to the program. The founding members of Nirvana Center, who were present in the meeting: Dr Chabilal Sharma, Mangala Sharma and David Stamp were recognized for their tremendous contribution in bring the organization to the present stage. They were honored with khada.
Read more »
Posted by अर्जुन प्रधान at 2:35 PM No comments: 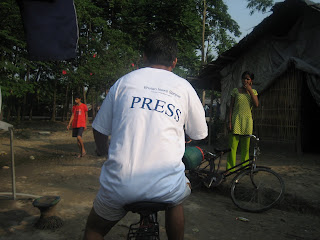